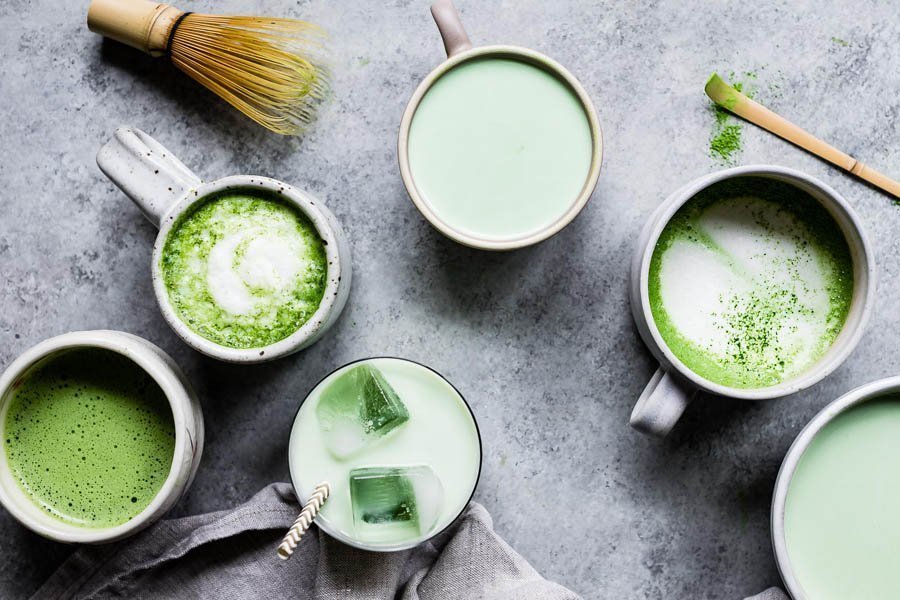 Matcha is a special kind of powdered green tea that is grown in Japan. Matcha tea is the pearl of Japanese green teas and has a cultural and traditional value in Japan. It is the only tea that has been used during Japanese tea ceremonies for over 800 years. Buddhist monks worship Matcha tea as a “healing elixir” because of its many positive health effects.

Special way of production of the green tea leaves

Matcha, as well as all the other green teas, is produced from Camellia sinensis. The green tea plants used for Matcha are shade-grown for three to four weeks before harvesting, so the shrubs are being protected from direct sunlight. Therefore, more chlorophyll and amino acids accumulate in the leaves, which gives the Matcha its characteristic vivid emerald green colour. Only the youngest and smallest tea leaves with the best quality chosen and are harvested by hand. The quality of the Matcha depends on the further production processes. To prevent oxidative processes in the leaves, to preserve the taste and nutritional value, they are gently steamed and dried.

With each sip of Matcha tea, we consume a mega dose of nutrients, antioxidants, fibres and chlorophyll, as Matcha tea contains much more than the other teas. While drinking Matcha, you consume whole green tea leaves and thus all its nutrients. When drinking a boiled regular green tea, only a low proportion of nutrients are being extracted into the water, the other part is discarded with the leaves. For the same healing effect of one cup of Matcha tea, you should drink 10 cups of regular green tea.

Matcha is a rich source of vitamins A, C, E, K and B group vitamins, and minerals such as selenium, chromium, zinc and magnesium. Matcha has many components that are powerful antioxidants: polyphenols, catechins and chlorophyll. It also contains large amounts of the amino acid L-theanine, which boosts the well-being.

When drinking a bitter and tasteless Matcha tea, you either have used a bad quality Matcha or have made a mistake in the preparation. The right preparation of the tea and its quality are the key to experiencing the true taste of Matcha, which due to the high content of chlorophyll and amino acids is very rich, unique and by the end leaves a sweet taste in the mouth.

For the perfect Matcha latte we should use a bamboo whisk, but we can also use some other kitchen utensils for foaming. Put about 1 teaspoon of Matcha in a cup and add a bit of cold water. Using a bamboo whisk, create a thick paste, in which you will pour 1 dcl of hot water. The water must be somewhere between 60 – 70° C, otherwise the tea will be bitter and we will destroy the active ingredients in the tea. We start to froth the Matcha with a whisk, making fast and straight movements in the shape of the letter W. If desired, you can add your favourite milk (or add plant-based milk: rice, soy, almond, coconut or oat milk) and a teaspoon of agave syrup or honey.

Treat yourself with this green bomb for health and make something beneficial for your health everyday.